The story you know. The man you don’t.

If you are an Indian who has appeared for any kind of entrance exam for a postgraduate degree in India (read: MBA), then you must have come across the concept of ‘G.E.M’ – which is supposed to be the abbreviation for  “General. Engineer. Male”. It is quite an ironic abbreviation. Because in those examinations, it is mostly these “GEMs” who have the toughest times cracking any entrance exam. With the kind of competition, we have in India ( this, in part because of us GEMs, who unlike the original stone, are not at all rare), it is an excruciating experience of having to merely get an admit.

Well, breaking news. The horror does not just stop there. Once you are done with your MBAs and are prepping for the lady luck to embrace you with instant good fortune, reality strikes. The only thing which changes instantly for you is the meaning of that little abbreviation. With the constant reminders of “Aur beta, Shaadi kab kar rahe?” (“So, when are you getting married, Son?”) from literally anyone who has ever witnessed you walk on this planet – the helpless ‘male’ from your ‘G.E.M’ enigma of the yore, gives way to a confused person hanging in balance, trying to explain how and why he still couldn’t have gotten married.

( The problem is much more gore if you happen to be a girl of the same age and qualification, but that tragedy, for some other time)

If you relate to the above situation then, the following disclaimer is imperative:

Disclaimer: “The persons and events in this blog post are 100% real. One might as well think that the man mentioned in the narration below is his/her own portrayal. Hence any similarity to your actual person or predicament is totally understandable and it is definitely much more than just coincidental”

Marriage is a family affair

At around 10pm of a tiring Thursday, the phone rang.
“Ankit, are you home yet?”, it was Behati (this changed name is eerily similar to the original one) on the phone. He had recently shifted to the society in which I was living for about a year. Before this, he was my junior at the B-school. A wildly popular entity at school (for all the good and bad reasons), Behati sounded nervous.

“I am standing infront of your door. Let’s go down for a walk”. He said

Though it wasn’t really natural of him to be asking for ‘walks’, I sensed the urgency in his voice and obliged.

“So how are things going?”. I asked, to gauge the situation.

“Ankit, I need to prepare a speech about myself,” Behati said. “I have been busy with work and haven’t gotten much time to think about it.”

“Are you changing jobs? Isn’t it too early for giving interviews? It’s hardly been a month”.I enquired.

“No, no. This is not for any job interview. But for a social meetup of our community for the prospective brides and groom and their families who have applied for this year’s marriage summit”. Behati replied.

“What in the world is a marriage summit now?” I asked.

“Don’t you know? It is a thing which is very common in our community,” he replied, slightly amused by my ignorance.

Marriage is an institution. It is one of the basic pillars of civilization. It is a celebration to corroborate the culmination of a successful relationship between a couple, so much so that they are now ready to involve the government in it and officially give legal meaning to the whole thing. Only in India, it usually is the first thing we are supposed to do at the start of a relationship.
And it is seldom a personal decision. It takes a lot of time, effort, energy and if you are from the girl’s side coming from a ‘traditional’ society still stuck in some abstruse timeline – a lot of money (which you may call as ‘gifts’ to the bride and groom).
It is all in all a big family affair. 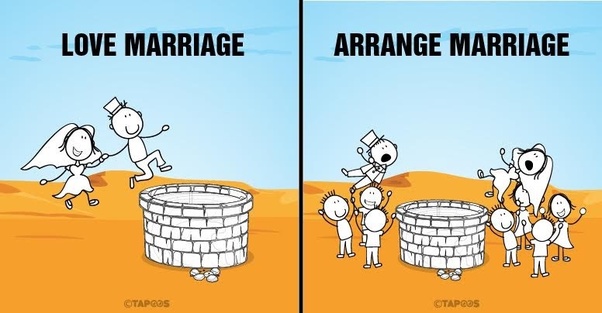 Meanwhile, looking at my confused expressions, Behati went ahead and showed me the Youtube trailer of the “10th Annual Mahishmati Community Marriage Summit”. The video started with the head organizer thumping his chest as the ratio of girls to boys participating at the summit was higher for the tenth time in a row. The video was beautifully made inviting participants for the summit. The prospective brides and grooms were supposed to register at a nominal fee, for an evening hosted and managed by the community where families get to meet the other prospects in person and initiate the discussion once mutual interest is established. The application and registration were preceded by form submission where one had to submit one’s bio-data to be printed on the community magazine. This magazine was to form the brochure and given to the people attending the summit.

Imagine it as a by-product of what would happen if Pokemon-Go collaborates with Tinder and is powered by Shaadi.com. It is an amazing concept! First, one has to run through the profiles and do a mental ‘right-swipe’ to the ones you like. Then you look at the profile from the brochure. Then there is a segment where each prospective bride or groom has to go on stage and give a formal introduction to fellow prospects and competitors with whom (s)he would have to battle for or against. It is this third leg of the summit- the ”showing-of-strength” which was giving Behati the jitters.

“You know speeches have never been my forte!”, he worried.

“Woah. And I thought the student council elections were the last thing we’d have to do canvassing for”, I replied, still assimilating the highly streamlined process, finding a bride/groom has become.

“Do you also have a question and answer round?” I asked jovially.

“Yes, obviously!”, He implied. “Last year, a guy got caught up in the question where one prospective bride’s father asked if he would prefer buying a car over sending the grandparents to tirth-yatra”.

I was way out of my area of expertise to give a reply.

“Don’t worry. It will be fine. You are a consultant now. That too in a big four! Besides, you’ve been giving presentations all through your MBA. Just remember those Placement Committee’s mock interviews and the psychometric tests which you gave in college”, I said after some time, not believing how and what we were discussing.

“Yes, you are right. I would probably talk about my work and hobbies and my expectations from this summit.” Behati said.
“Yes! That’s the way. Just try and be yourself”. I said, trying to encourage him.
“Just don’t be too much of yourself”. I checked myself, having known him since MBA.
“Let’s grab some tea and get back home”. We dispersed.

The phone buzzed. It was a message from Behati.

Behati: Ankit
Me: Yes, Behati. What’s up? Done with the marriage summit?

Behati: Nooo man!!!!….. I am about to go on stage next. They are taking stress interview type question and answers this time. You need to help me.
Find the answer to “How will GST impact the Mahishmati community as a whole?”

Me: What the absolute heck??!!